We're still in the first minutes of the first day of the internet revolution.

There have been a number of purpose built System-on-Chip (SoC) devices intended for connecting to the Internet of Things (IoT). Examples include the ESP8266 (WiFi), the CC2530 (Zigbee), or the Spirit1 (sub-1GHz), for different wireless connection standards. In the Bluetooth & ANT IoT connectivity space, Nordic Semiconductor has been playing a winning hand with their ARM Cortex-M0 based nRF51822 IoT SoC, and they have just seriously upped the ante with their new ARM Cortex-M4F based nRF52832 IoT SoC. It's a multiprotocol RF SoC that supports Bluetooth Smart, ANT, Near Field Communication (NFC), Out-of-Band Pairing (OoB), Ultra-Low Power (ULP), and more.

The new Nordic Semiconductor Multiprotocol RF SoC IC has just been announced, and the nRF52832 IoT SoC is a pretty amazing piece of design work. You can get an idea of the high level of integration just looking at the block diagram : 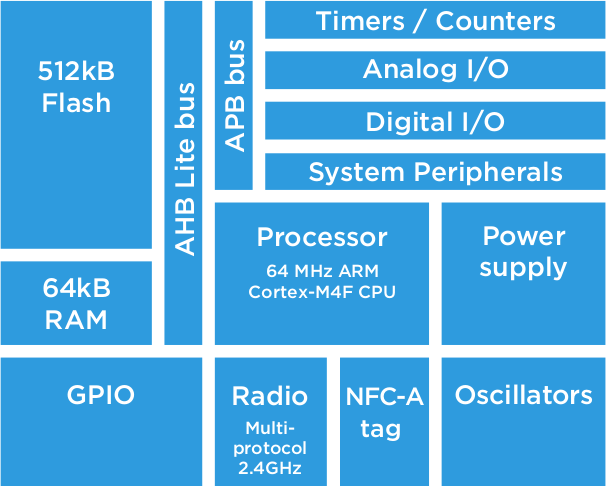 A quick rundown of the IoT SoC hardware features -
and why we're really excited about working with this new RF platform :

I have to say, this is an ideal RF architecture from my point of view, and I think that the Nordic engineers came up with a really excellent SoC design. If someone gave me a team of ASIC designers and a budget, it's pretty much what I'd want to design for a Bluetooth Smart/ANT IoT System-on-Chip. 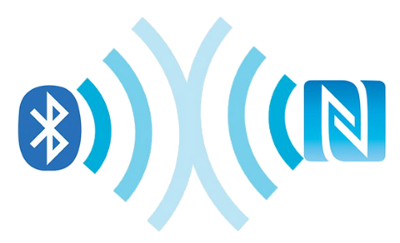 By including a Near Field Communications (NFC-A) module with proximity detection and Wake-on-NFC capability, the nRF52832 IoT SoC is really going to improve the user experience with seamless device pairing (no codes to enter), and proximity operation. The Near Field Communications (NFC-A) module can provide the pairing keys, so that an authorized device can connect automatically - no fuss - no muss...

The proximity detection capability will enable a whole variety of "walk up - turn on" usage scenarios and is a good addition to the NFC capability.

The new 2.4GHz multiprotocol radio module supports Bluetooth Smart, and ANT as well as other proprietary protocols. It is also backward compatible (on air compatible) with the earlier Nordic radios, like the nRF24AP, nRF24L and nRF51 Series. The RF output power is now scalable from a maximum of +4dBm down to -20dBm in 4dB steps; with increased sensitivity range(s) from -96dBm to -89dBm, depending on the data rate.

I wish that more ASSP/ASIC designers understood how offloading the peripheral communications from the CPU to dedicated hardware can both lower the power budget and increase the I/O throughput. The Nordic team clearly got that right with their new Programmable Peripheral Interconnect (PPI) system, which provides a twenty (20) channel bus for direct and autonomous peripheral communications, and offloads that work from the CPU. That means the CPU can be sleeping more often, saving those precious microamps of battery power.

This was a really smart move by the Nordic team, as the ARM Cortex-M4F CPU is both powerful, and still relatively power efficient. I've been using the ARM Cortex-M4F for a while now, on the excellent Teensy 3.1 platform designed by Paul Stoffregen, and it is a really nice processor architecture - with hardware support for DSP instructions and floating point operations.

Using the ARM Cortex-M4F Central Processor means that the nRF52832 IoT SoC has enough CPU horsepower to handle a variety of tasks, especially with their PPI I/O offloading system. One of the problems with using the Internet Protocol Smart Objects (ISPO) standard is that the common sensor value returns are all in floating point format - well no problem with the nRF52832 IoT SoC, it's got floating point operation covered. (Try that on an 8bit i8051 IoT SoC, and you'll be waiting a while...)

So, how does the new Nordic nRF52832 IoT SoC stack up against the other leading Bluetooth SoCs?
Here's a quick comparison :

I think the only change I might have made to this architecture would have been to go "Big-Little" with it. That is to say, keep the nRF51822 style Cortex-M0 as the "Little" CPU for the RF Stack and the PMIC functions, and add the Cortex-M4F as the "Big" CPU for the application processor. Of course, that is going to add silicon area, cost, and complexity; so the Nordic designers likely discarded that architecture in order to hit their cost targets.

The advantage of that architecture however, is the ability to overlap the operation of the RF stack(M0) with the application code(M4F); as well as a measure of separation, so that the application code can't interfere with the RF stack (as easily). The M4F (with FPU running) takes more power than the M0, so being able to switch back and forth (highest performance/lowest power) might afford a small degree of power savings as well.

All in all, that is a pretty minor critique. It looks like the Nordic design team did a really nice job on this new IoT SoC.

The specificiations look excellent, and we're looking forward to getting the reference designs to start working with. The part has just been announced, so we also haven't seen any production/distribution pricing for the part yet. But just based on the specifications, I willing to bet this part will be one of the more popular Bluetooth Smart/ANT RF platforms for the next generation of IoT/connected devices.