What are Device Trees?

A Device Tree is a data structure for describing the heirarchy of hardware subsystems within a computing platform, or an add-on peripheral to that platform. It can be used to automatically select and configure the device drivers for that computing platform. A Device Tree can be represented in several formats, such as the human readable "Device Tree Source" format, or the compact, binary, "Flattened Device Tree" format. 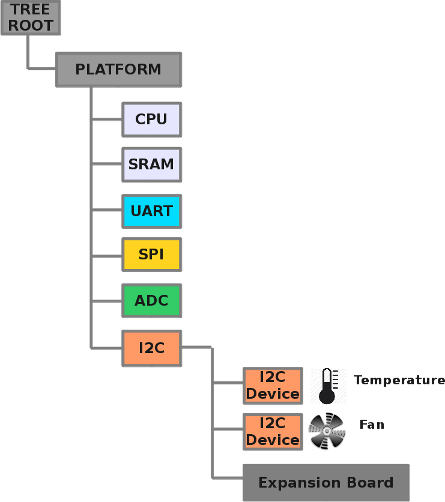 As many new and different System-on-Chip (SOC) based embedded computing platforms started appearing a few years ago, it became increasingly difficult to support all the various operating system configurations required for Linux, IOS, Windows, and others.

Prior to the adoption of the Device Tree format, this platform information was contained in what is known as the Board Support Package (BSP), a group of files provided by the manufacturer of that particular board. Each new operating system version would need to include the hardware configuration information from the Board Support Package (BSP) in order to be able to run on that particular board. This quickly became a bottleneck in the process of supporting new computing platforms that had only minor variations, so Linus Torvalds and others needed to push back, and come up with a more dynamic method of describing the hardware of the computing platform.

The Device Tree format was adopted to serve as the container format for hardware configuration information required during the boot process, however a way was still needed to modify the system after the boot up process, and to support expansion boards and subsystems. Pantelis Antoniu, Grant Likely, and others have outlined a solution that allows for Device Tree Overlays, and an expansion board (Cape) manager to modify the Device Tree from user-space, during run-time. This allows users to load and unload hardware peripherals and drivers as needed. The transition away from solely using Board Support Package (BSP) files to the Device Tree format is ongoing, and not without it's share of problems.

So, what is an embedded device tree, and how do we describe it? Let's look at a common example, say the BeagleBone Black, which uses an OMAP3 System-on-Chip from Texas Instruments. A very (very) simplified example, including just the CPU and it's main memory, would look something like this :

The corresponding Device Tree Source (.dts) file for the above would look something like :

As we can see from the above Device Tree Source (.dts) example, we have defined the following :

Of course, the actual Device Tree Source (.dts) file, in this case, the am335x-bone-common.dtsi include file has much more detail, but I'll build up the concepts gradually using simplified snippets.

Next we'll add some input/output to the Device Tree Source (.dts) file, and we'll start with a simple I2C controller in order to create a tiny, but useful little computing platform description :

The first thing we added above is the I/O Pin Multiplexing defintions, as most modern System-on-Chip (SoC) devices have several functions available per pin for application flexibility. We need to define what pins are going to be used to connect the I2C controller to the outside world.

The next section defines the I2C controller itself, which is located on the OCP bus (Open Core Protocol) which is the name for one of internal bus connections in the System-on-Chip (SoC):

And finally, we describe a sub-node of the I2C controller (i.e. an attached I2C device), called "tps":

Alright, now we need to define the "tps" node to make this a more complete Device Tree Source (.dts) file, which allows me to introduce the concept of power supply descriptions. It is really useful to know how much power that the power supplies on a board are capable of providing, and what additional power that expansion devices or add-on boards will require. That will allow us to indicate an error if an expansion device requires more power than we are capable of providing.

In the above example, you'll start to see the use of Device Tree Source Include files (.dtsi), which allow us to include subnode definitions by model name, for building heirarchically. You'll also notice the defintion of the "dcdc2_reg" label here, which was used in our first example to define the power supply for the cpu. A few of the parameters worth mentioning:

On a typical Linux system distribution, you can install the Device Tree compiler using : Then check your installation, by asking for the DTC version : If you are looking for a specific how-to guide for BeagleBone, Raspberry Pi, Xixlinx, Altera, etc, please see the References section at the end of this article for a complete listing. A number of people in the community have already written some excellent guides for specific platforms.

So what does the output of the Device Tree Compiler look like? If you want the gory details(including the address alignment requirements), they are described in Chapter 8 of the ePAPR specification, but here's a quick overview : 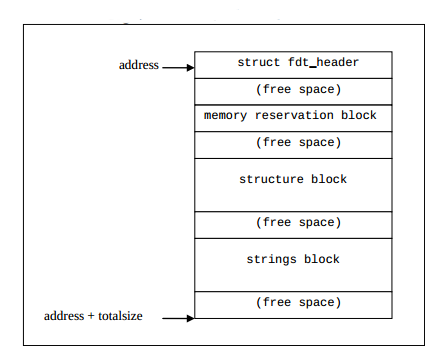 And the Flattened Device Tree Binary Header Structure (fdt_header) looks like this : 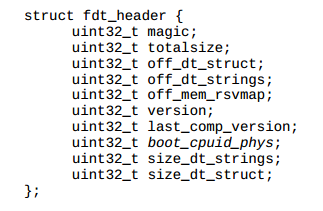 After the Flattened Device Tree Binary Header Structure, comes the memory reservation block, the structure block, and the strings block, respectively. So the Flattened Device Tree Binary format is not that complicated to understand, and the main "action" occurs by parsing the "structure" block, which holds the node relationships (i.e. the graph of the tree). The structure block is a list of nodes, separated by the following tokens to give the tree it's structure :

At the end of the Flattened Device Tree Binary Object is the "Strings Block", containing all the property name strings used in the tree concatenated together. The "Structure Block" refers to the strings within the "String Block" using an offset from the start address of the "Strings Block". If you want to take a look at a FDT parser, then check out the libfdt library for handling FDT (BLOB) objects.

In the next article, I'll cover Device Tree Overlays, the new mechanism for describing the hardware of add-on boards like BeagleBone "Capes", or Raspberry Pi "Plates".