A smart man makes a mistake, learns from it, and never makes that mistake again. But a wise man finds a smart man and learns from him how to avoid the mistake altogether.

Lately, I've been working on automatic discovery and configuration of devices and peripherals, using Binary Level Objects, like the IPMI FRU, the Devicetree and Devicetree Overlay formats. Typically these have been implemented using just a "dumb" storage device, like an EEPROM, or an SDcard, or perhaps a Dynamic NFC/RFID tag. So, what then, do I mean by a "Smart" Devicetree?

A few years ago, we were all abuzz about the "$1" ARM Cortex devices like the Cortex M-3, and later, the Cortex M-0 devices. Hat's off to ARM Ltd. for making 32-bit microcontrollers ubiquitous. By now (2015), the cost of simple microcontrollers are more about the amount of flash memory and the features included, than the microcontroller itself. These days I can usually find a low feature, low pin count, microcontroller for little more than the cost of a "dumb" storage device. Additionally, the smartphone and mobile handset market have led the push to smaller packages, and lower power microcontrollers, in order to increase the battery powered run time. So the threshold for adding "intelligence" (i.e. a microcontroller) to solving hardware design problems has gotten very low indeed.

Regardless of what kind of microcontroller and development environment you choose for your products, you'll soon realize that you need to keep track of a lot of metadata which most development enviroments will leave up to you, the user. I'm talking about the kinds of data you need regardless of what kind of product you are building, and what kind of firmware/software you are using. How do you keep track of things like Serial Numbers, Version Numbers, MAC ID's, Interface Addresses, etc. in a uniform way? Where do you keep them in your firmware (program)and how do you keep them current without having to change the firmware itself? From a complex Drone design to a more simple toaster oven, wouldn't it be good if we could handle all that metadata in a more simple and consistant way? 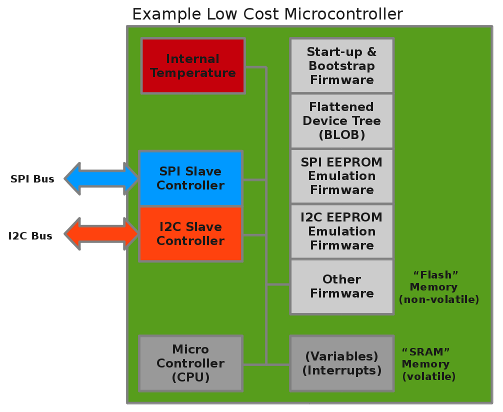 Of course, "under the hood", this solution is not "dumb" at all. When you utilize an I2C or SPI EEPROM emulation function, you generally pass a pointer to the flash memory area that you want reserved for the EEPROM memory emulation. If we are not going to do much else with microcontroller we might even reserve the majority of the microcontrollers flash memory. Now, imagine for a moment that reserved flash memory area is used to hold the Flattened Devicetree "BLOB" of binary data, perhaps for an expansion board. What we have now, is a "Smart Devicetree". We can even access that Devicetree from two different interfaces, namely I2C, and SPI at the same time. In my last article I demonstrated how to map the Devicetree onto a Modbus RTU using a UART interface. I've successfully employed these techniques in several customer designs.

Adding the Devicetree data structure to an embedded micrcontroller design is pretty straightforward and simple, and enables the automatic discovery and configuration of a variety of devices and peripherals; and that is just the beginning of what we can do with a Smart Devicetree.